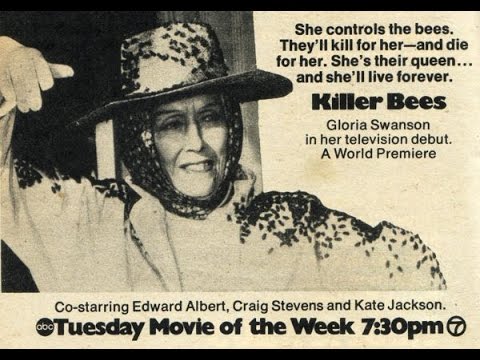 This was an ABC t.v. movie directed by Curtis Harrington. Harrington directed multiple t.v. movies, including The Dead Don’t Die and Devil Dog: The Hound of Hell. He also worked with Roger Corman and was mentored by a voodoo priestess. Overall, he seemed like a cool man. The movie stars Kate Jackson (Sabrina from Charlie’s Angels!), Edward Albert, and frickin’ GLORIA SWANSON. Amazing. Apparently, Bette Davis was the first choice to be in the movie. She was friends with Carrington. Her doctor warned Davis against taking the part due to her bee allergy. Swanson is amazing in this but I also wonder what Bette Davis could have done. Last week, I watched Deadly Invasion: The Killer Bee Nightmare and this movie couldn’t handle the subject matter any more differently. Killer Bees isn’t on VHS or DVD so I found a print on YouTube. It has some tracking issues but I found that charming. That’s why my screencaps aren’t so hot.
Edward Albert plays Edward Van Bohlen, the black sheep in the well-to-do Van Bohlen family. The family started a vineyard in California and the town they live in basically grew up around the vineyard. They’re very powerful and the whole town seems to fear them. 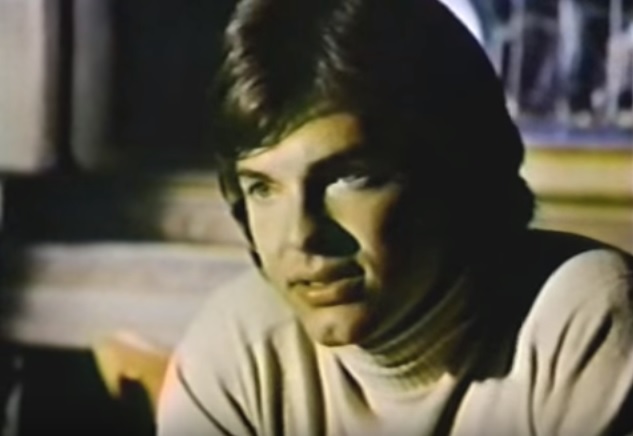 Edward hasn’t been home since he went to school and is only going back at the insistence of his girlfriend, Tori (Kate Jackson). Not only are they engaged but she’s pregnant. 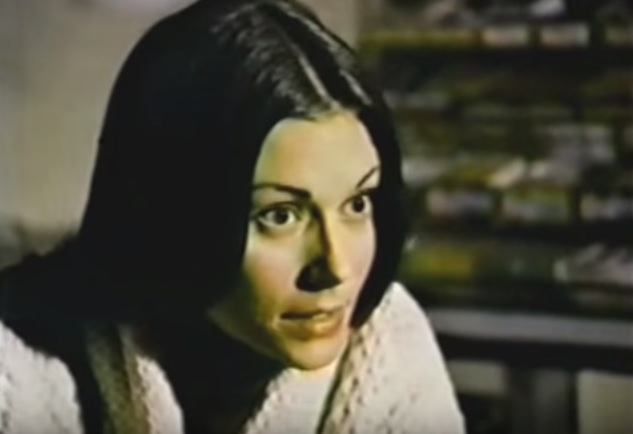 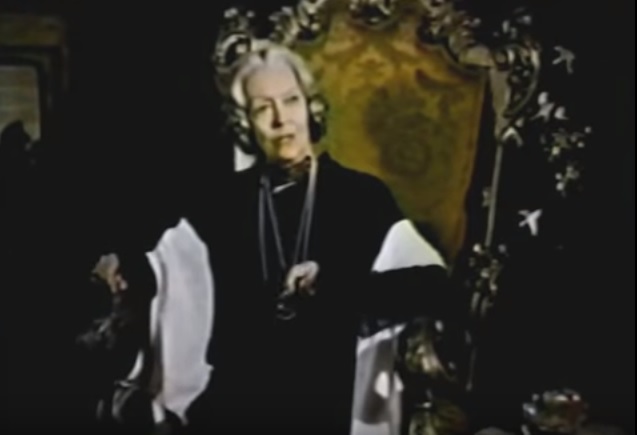 The Van Bohlens, while a powerful influence in the town, are also incredibly isolated from it. The vineyards are fenced off from the outside world with signs to discourage trespassers and a huge gate barring access to their mansion. The rest of the family consists of Edward’s father and brothers. No one is happy that he brought a girlfriend who is clearly beneath their social class and they’re even less happy when they realize that Edward is engaged. Tori is trying to make a good impression but it’s so clear that no one in the family is happy that she’s there. The tension culminates with Madame dying.
An aura of menace surrounds their visit from the very beginning. A salesman (played by Jack Perkins) trespasses on the Van Bohlen vineyards and is attacked by a swarm of bees in his car when Edward and Tori first arrive. Then, a lineman who witnessed the accident and is helping the police is also attacked while on an electrical pole. 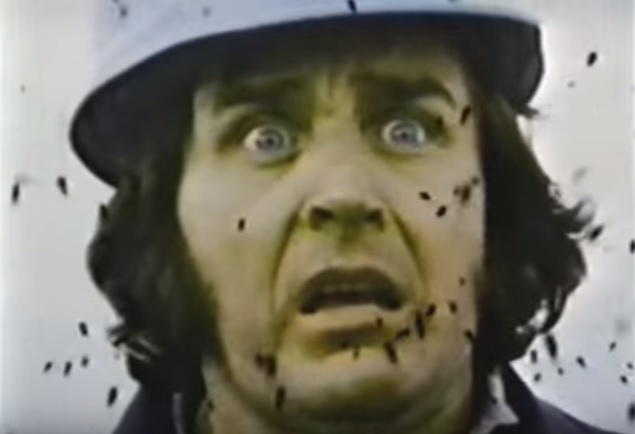 The bees are ever present at the Van Bohlen estate. Madame maintains a swarm of African honey bees. Honey is an essential component of Von Bohlen wine. And Madame is utterly unafraid of the bees. 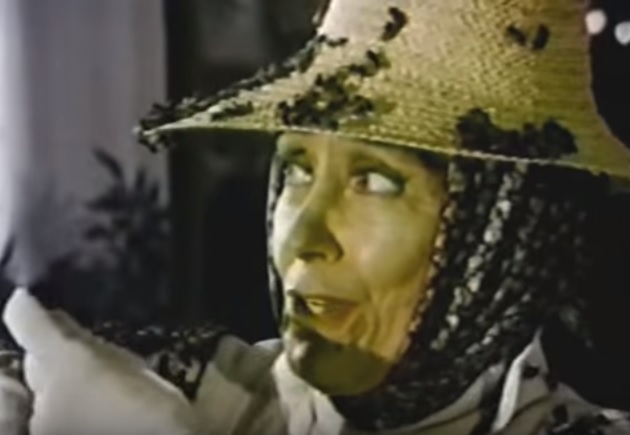 Apparently, the bees were kept on dry ice before filming and placed on Gloria Swanson. As the lights went on the bees warmed up and started to become more active.
Tori skips Madame’s funeral so as not to aggravate the family any further. A swarm of bees shows up at the service and becomes aggressive when an altar boy attacks them. The swarm goes straight back to the Van Bohlen house where they attack Tori. 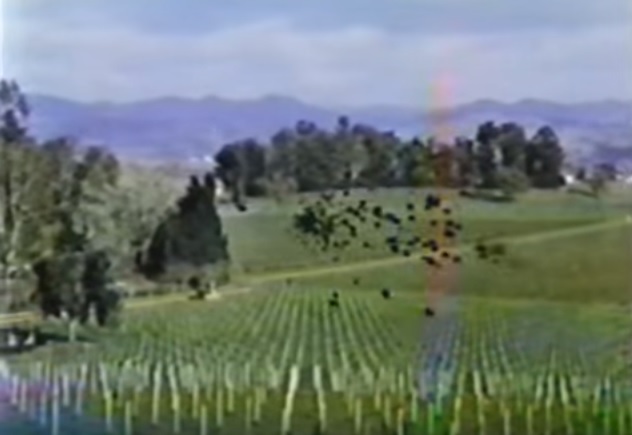 Tori is initially overwhelmed but then embraces the power of bees. 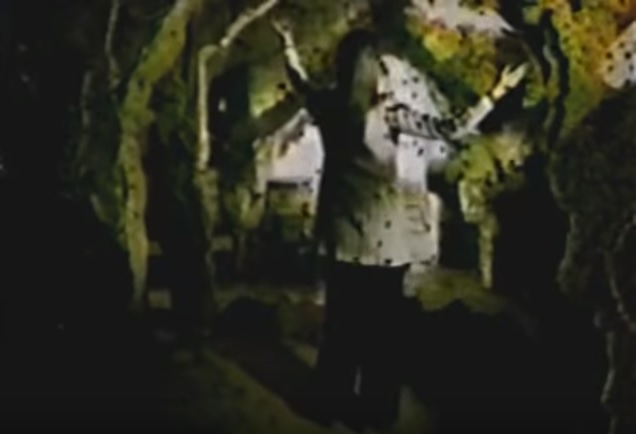 Edward runs to rescue her but when he gets to the house, he finds Tori unhurt and acting very strange. Her demeanor is entirely different and she soon sits in Madame’s chair. Yes, she’s clearly being possessed by the spirit of his grandmother. 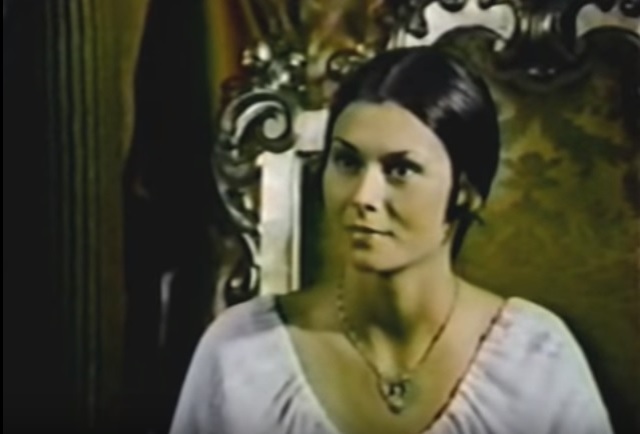 The pacing of this movie is much slower than Deadly Invasion: The Killer Bee Nightmare. Deadly Invasion is mostly powered by sheer “What did I just see?” ridiculousness. Killer Bees is the more thoughtful of the two narratives.
The purpose of Deadly Invasion was clearly to raise awareness about what was considered an impending ecological crisis. Killer Bees is a character study of a pathological family. The threat from the bees isn’t because they’re African, it’s because they carry out the whims of Madame. African honey bees are known for their aggressiveness and willingness to defend their hives and queen. In this movie, Madame is the queen. It’s not subtle that all that remains of her family are male relatives and that she’s infuriated by a female interloper. There’s even a model of the Van Bohlen mansion that’s frequently shown covered in bees. 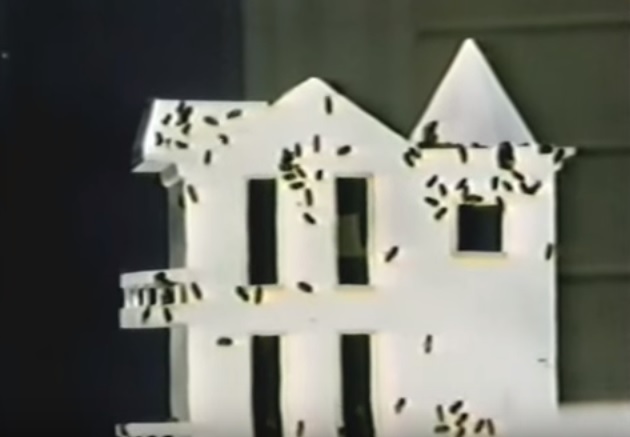 This movie is both a seeing is believing kind of movie but is also genuinely good. What’s not to love about menacing bees psychically controlled by an old woman?
It’s easy to forget that t.v. movies were a way for aging actors to continue working. Gloria Swanson is amazing in this. She manages to be menacing without raising her voice. The performances are consistently good, especially Kate Jackson. The switch from put-upon girlfriend to the new Madame is quite entertaining. I just wish this had a proper release.
I’d also like to credit Are You in the House Alone?, a book edited by Amanda Reyes. It’s a selection of essays about t.v. movies and reviews/recaps of t.v. movies from the 1960s through the 1990s. It even has a special section for Stephen King miniseries. It’s a great resource for anyone who loves t.v. movies as much as I do and is leading me towards some new, interesting movies that I don’t think many people talk about.

I like scary movies a little too much. I thought I'd share my obsession with you.
View all posts by scarina →
This entry was posted in 1970's, eco-horror, possession, psychological, supernatural, television, thriller, tv and tagged famous people liek whoa, gloria swanson, killer bees, made for t.v., nature hates you, our love is made-for-tv, scenes that make you go "What?", where's my soul?. Bookmark the permalink.