This is it! The last post in Slashermas/Slashermarch! This lasted way longer than I meant it to which really goes to show that when I commit to something I really commit to it. I definitely had fun doing this but I mostly want to see a movie that isn’t a slasher. Something supernatural? Zombies? Anything, please?
The last movie is the 2000 Aussie horror-comedy Cut.
Kylie Minogue plays horror director Hilary Jacobs.

Brad (Frank Roberts), the actor who plays Scarman, confronts Jacobs after being berated by her. He ends up mutilating himself and brutally killing Jacobs. Vanessa walks in on this and kills Brad. The movie is never finished but remains a legend, especially after more people who are associated with it die.
Fast-forward to the present–well, the present circa 2000. The P.A. on the film, Lossman (Geoff Revell) is now teaching about film. His students, Raffy Carruthers (Jessica Napier) and Hester Ryan (Sarah Kants) want to pick up where the film left off, despite all the dire warnings of doom from Lossman and this guy. 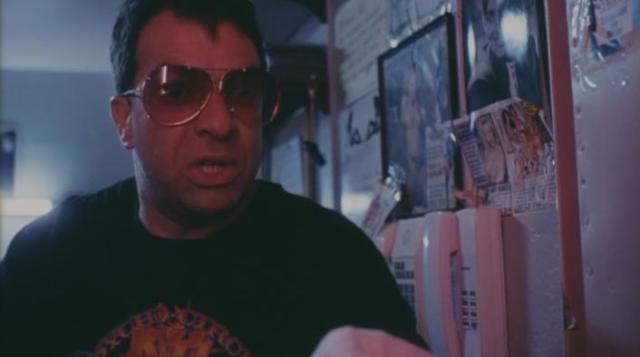 They hire Vanessa Turnbill to play her character’s mother and filming resumes, with Raffy and Hester in charge of a crew of utterly interchangeable people. But then people start going missing. And it seems like there are multiple Scarmen on the set.

Yup, the deaths in the original film combined with the negative energy on set created a real Scarman that manifests whenever the movie is worked on or even screened. And it’s up to this plucky gang to fight Scarman! Wait, did I say “plucky?” I meant to say “highly annoying.” I think the problem is that all the characters are so similar they could be interchangeable. Am I just a crabby old person who doesn’t like the youth of today? Probably. But these people are only distinguished by who they’re dating or want to date and that doesn’t make a fully fleshed character. I wish someone had cut (hehe) the cast in half. Then, maybe I could have cared more and been more entertained.
There was definitely humor in the piece and I think the filmmakers really love slashers and care about them. Maybe I’m just old and jaded and tired of movies winking and nodding about the horror genre? Possibly. There are serious pacing issues with this movie and parts of it dragged so much. You know your movie isn’t doing the best when you wish you were really watching the movie within the movie.

That being said, every single moment with Kylie Minogue or Molly Ringwald on screen is pure gold. It’s easy to forget that Molly is really, really funny and she brings a biting wit to her vain character that I love. Plus, she’s a tough and competent Final WOMAN. Is this why Cut was brought into my life? Is this the lesson I was meant to learn? Probably…not.
Past Slashermas Offerings
Dark Night of the Scarecrow
A Nightmare on Elm Street (2010)
Sleepaway Camp
Tenebrae
Opera
Who can Kill a Child?
Psycho
The Texas Chain Saw Massacre
Bloody Mary (2006)
Halloween II (1981)
Prom Night (1980)

I like scary movies a little too much. I thought I'd share my obsession with you.
View all posts by scarina →
This entry was posted in 21st century, comedy, foreign, slasher, slashermas 2013, supernatural and tagged australia, cut, famous people liek whoa, slashermas 2013, women who kick ass. Bookmark the permalink.