I had to delay writing about this movie because there was a bit of wait for it. Yes, there was a wait for Rick Sloane’s 1988 opus magnum, Hobgoblins. This movie is a fairly notorious Gremlins knockoff and is generally considered [by the internet] to be one of the worst films in existence. I first saw this movie as an episode of Mystery Science Theater 3000. Even the seasoned staff writer Paul Chaplin considers it one of the worst movies they’ve ever done.
So, why did I want to watch this without Mike and the bots? I…don’t know. Maybe I’m a bit of a masochist. I like to watch the MST3K movies without the gang, just to see if I can endure it. I even own an un-Misted copy of Future Wax War. This movie is so bad that Pearl only sent it to Mike and the ‘bots as punishment because they were jumping and squeezing juice boxes on her new couch.
What the hell is this movie about? I’ve seen it about 800 times in its MST3K form but I think that part of my frontal lobe has been burnt out. I’ve selectively repressed the movie. Here’s the recap, as best as I can remember.
There’s an old movie studio that’s being guarded by a very old Dick van Dyke-alike and a very young David Coulier-alike. For reasons that I can’t quite remember, the young guy goes into an old film vault and is suddenly on stage at a rock concert. Music that sounds like a third-rate Loverboy tribute band is playing and he struts around on stage. Alas, he falls off and dies. So the old man needs a new assistant security guard. He hires Kevin, the Charlie Brown of a group that consists of his frigid girlfriend, a nymphomaniac, a guy addicted to calling the sex line 976-SCAG, and an army meathead. They hang out at someone’s house, it isn’t really clear, and Nick, the army-meathead who’s also dating the nymphomaniac, Daphne, convinces Kevin to get into a fight with him that involves gardening tools. The fight goes on for two minutes. I timed it. And every time the gardening tools touch there’s a little Casio keyboard noise. 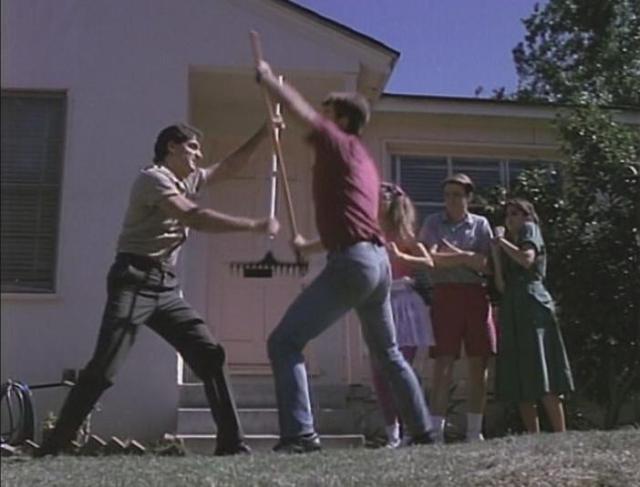 This goes on for two minutes. That’s TWO MINUTES. Nick and Daphne scamper off for some really fast, really intense celebratory coitus. I mean, I guess it’s intense because Nick’s van rocks back and forth really really hard. And watching that scene rendered me sterile.
Kevin’s on the job and a guy who looks like an escapee from an Ah-Ha music video is skulking around the lot for…some reason. But it does give us this shot of the old man driving a golf cart. 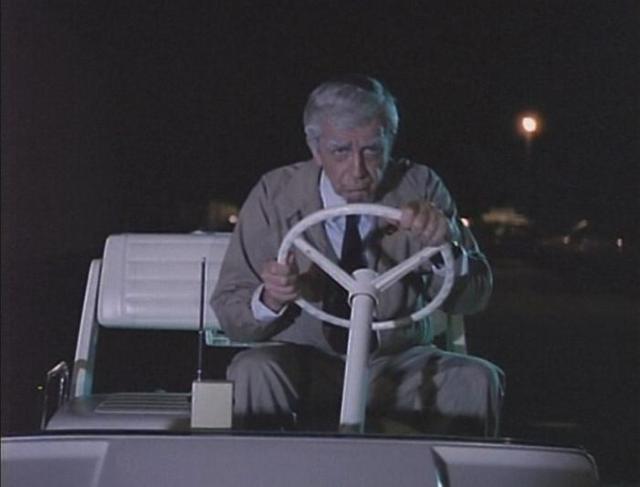 Liberty Medical will cover your golf cart, even if it's stolen by hobgoblins.

Way to go, Kevin, you great douche. Smooth move, Ferguson. Now the hobgoblins have been released on the world. Apparently, their evil power is that they make people’s fantasies come true and then kill them via their fantasies. The old man’s been keeping them locked in a film vault for thirty years, since they landed on the studio.

Don’t ask me why the old man doesn’t, oh, I don’t know, BURN THEM WITH FIRE. Or, more importantly, why are creatures with access to interplanetary travel stymied by a locked door? ARGH! I hate you, Sloane!
Oh, and you don’t see the hobgoblins until forty minutes into the movie. That’s forty minutes of exposition about the personal lives of these characters. That’s forty minutes that it took to erase the idea in my mind that there’s any goodness or hope in the world.
The puppets hobgoblins immediately go to Kevin’s house and start rubbing themselves on his friends. I don’t know how they got directions there. Or why they chose his house.

Now the hobgoblin’s have access to his friend’s minds. Kyle, the friend with the busy hand who likes 976-SCAG is the first to succumb. He’s been having regular phone sex chats with “Fantazia.” In reality, she’s a blonde woman with a Gibson girl ‘do and is super buttoned-up. Even if she chats about how she wants to do it on the floor of a movie theater and have him lick artificial butter flavoring off of her body or how that one time at the zoo she told the zookeeper she could never take a cockatiel that big. Of course, Kyle’s fantasy version of her arrives.

Fantazia's outfit is brought to us by American Apparel.

Kevin saves Kyle from being pushed off of a cliff at the local makeout spot, Reputation Road.
Amy, the frigid girlfriend, is the next to succumb. She decides that she wants to strip so she goes to Club Scum. Rick Sloane’s version of female sexuality is a nuanced and delicate thing. And by nuanced and delicate, I mean, what the hell?! Every single character in this movie is universally awful with literally no redeeming qualities whatsoever, but the women seem hit especially hard with the Virgin/Whore complex.
Actually, I was wrong about every character being awful. Because we meet my favorite character, the M.C. of Club Scum. 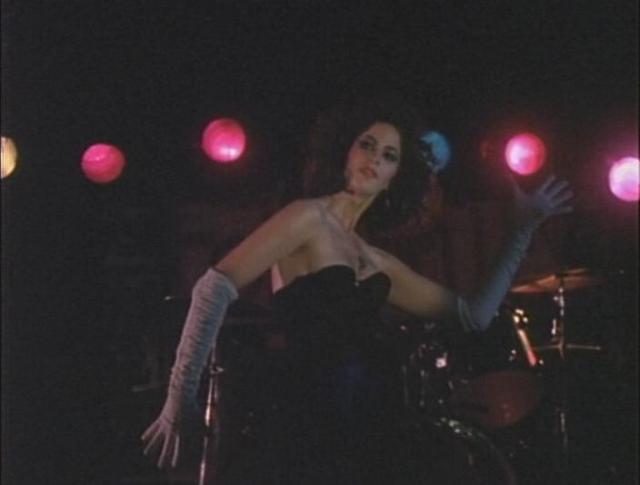 On the plus side, we do get this shot of the Club Scum M.C. It made me realize how much he looks like Kurt from Glee. 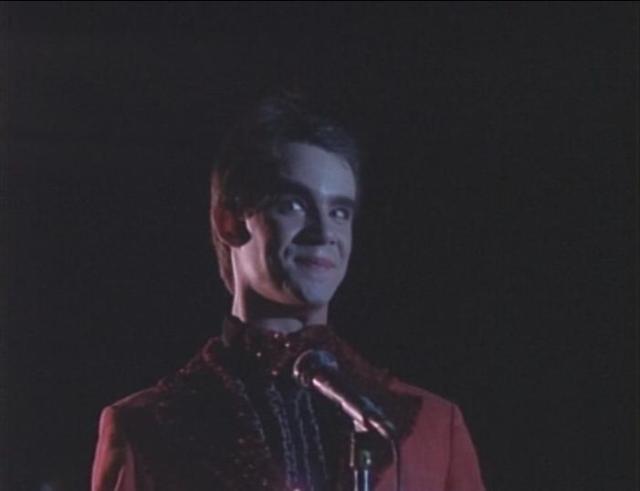 This is what a degree in musical theater will get you. A job emceeing donkey shows.

Have fun singing “Defying Gravity” to the seven drunks who seem to go to this club/high school cafeteria. The hobgoblins wreak havoc in the club and I’m beyond caring. I know nothing anymore, I don’t even remember a time when there weren’t hobgoblins. All I know is that in this scene one guy knocks over his own table three times. Three times. Oh, and at one point Amy is making out with the bouncer of the club, Road Rash. He hears people screaming and says, “What’s that screaming?” And Amy’s response is, “That’s me faking my orgasms for you.” Wait, wat? I…can’t with you. Do guys find women faking orgasms sexy? By this point Nick has gone completely mental. He’s chucking grenades everywhere–because the army just hands out grenades–but instead of blowing anything up they just start little fires everywhere. His commanding officer that’s being impersonated by a hobgoblin tells him to save the troops by jumping on a grenade. Nick is completely immolated and I start to cheer up a bit. But then the C.O. suggests that Daphne join the U.S.O. and she can start off by servicing a truck full of new recruits. Double-you. Tee. Eff. Sloane, you’re insulting single-celled organisms.
For reasons that I don’t quite understand, the hobgoblins return to their old vault and the old man blows up the vault. Why didn’t you do that thirty years ago?!?!?!?! Oh, and Nick isn’t really dead. His burning to death left him with minor irritation. Is it over yet, can I stop?
Sometimes it gets really frustrating watching movies that are poorly made, whether or not the premise is good. While this movie is technically adequate (Except for the music, which sounds like it came from an episode of Goosebumps), everything from the plot, the writing, the characters, the acting, the sets, the special effects, left a bad taste in my mouth. I really could use some time in the Harmony Hut.

I like scary movies a little too much. I thought I'd share my obsession with you.
View all posts by scarina →
This entry was posted in 1980's, creatures and tagged as seen on mst3k, hated, hobgoblins, mst3k, namechecking mst3k, scenes that make you go "What?". Bookmark the permalink.

5 Responses to Sex Ur Doing it Wrong, Rick Sloane